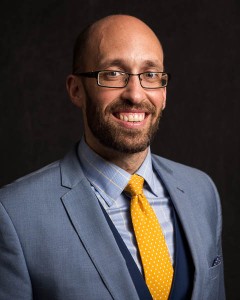 Miller Eccles Study Group Texas is thrilled to welcome fellow Texan and Sam Houston State University professor Benjamin E. Park as our March 2020 speaker.  He will talk about his just-published book Kingdom of Nauvoo: The Rise and Fall of a Religious Empire.

The publisher describes the book this way: “A raucous, violent, character-driven story, Kingdom of Nauvoo raises many of the central questions of American history, and even serves as a parable for the American present. How far does religious freedom extend? Can religious and other minority groups survive in a democracy where the majority dictates the law of the land? The Mormons of Nauvoo, who initially believed in the promise of American democracy, would become its strongest critics. Throughout his absorbing chronicle, Park shows the many ways in which the Mormons were representative of their era, and in doing so elevates nineteenth century Mormon history into the American mainstream.”

We hope you’ll join us as we learn more about one of the most pivotal periods of time in Latter-day Saint history.

“Kingdom of Nauvoo: The Rise and Fall of a Religious Empire on the American Frontier”

While Nauvoo may be a familiar story to members of the Church of Jesus Christ of Latter-day Saints, it is largely unknown to the broader world. Kingdom of Nauvoo is the first attempt since Robert Flanders, over fifty years ago, to try and tell the compelling tale to those outside the faith as a way to better understand American history writ large. This presentation will examine how Nauvoo looks different when viewed from this larger context, and what lessons from the saga remain to be uncovered.

Benjamin E. Park received his doctorate from Cambridge University and currently teaches American religious history at Sam Houston State University. His scholarly work has appeared in over a dozen academic journals, and his first book, American Nationalisms: Imagining Union in the Age of Revolutions, was published by Cambridge University Press in 2018. He currently serves as co-editor, with Quincy Newell, of the Mormon Studies Review, as well as on the executive boards for the Mormon History Association and Dialogue: A Journal of Mormon Thought. W.W. Norton/Liveright just published his Kingdom of Nauvoo: The Rise and Fall of a Religious Empire on the American Frontier, and Wiley-Blackwell will publish his Companion to American Religious History in the fall.