The history of Latter-day Saint ordinances is fascinating, and thanks to the excellent work of Jonathan Stapley, has recently become much more accessible.  In early 2018, Oxford University Press published Stapley’s landmark work The Power of Godliness: Mormon Liturgy and Cosmology.

“This imaginative and impeccably documented inquiry into the Mormon ordering of cosmos and community probes the connection between liturgical and ecclesiastical structures and casts new light on both.  Drawing upon his prodigious research in personal narratives and institutional sources that span decades of Mormon history, Stapley demonstrates how successive changes in Mormon rituals have affected the beliefs and experiences of ordinary women and men.  The book’s detailed and even-handed treatment of such complicated and contested issues as shifting conceptualizations of priesthood and women’s longtime participation in healing rituals makes it a fascinating read, a valuable reference, and a helpful bridge between the Mormonism of the present and its all-too-distant past.”

We hope you’ll join us to learn more about The Power of Godliness.

Mormon conceptions of priesthood, gender, and authority are of intense social interest, but have proved challenging to understand for both scholars and believers alike.  In this presentation, Stapley will share several key findings from his book that connects the present to the past in comprehensible ways.  From the priesthood language of the Nauvoo Temple to the diverse liturgy of the church, Stapley will discuss the ways in which members of The Church of Jesus Christ of Latter-day Saints order their universe. 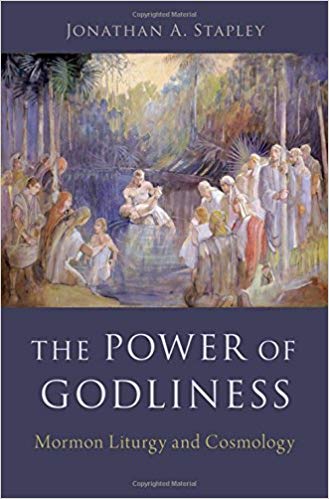 Jonathan Stapley is an award-winning historian, scientist, and Chief Technology Officer of a company he founded.  Oxford University Press published his volume, The Power of Godliness in early 2018.  Stapley received his Ph.D. from Purdue University and has been active in the field of Mormon History for over a decade.  He also writes for the academic history Juvenile Instructor blog, and at By Common Consent, a Mormon blog.