Miller Eccles Study Group Texas is excited to announce that our February, 2016, speaker will be Professor W. Paul Reeve.  In addition to teaching a variety of history classes, Paul is Director of Graduate Studies in the History Department at the University of Utah.  His most recent book, Religion of a Different Color: Race and the Mormon Struggle for Whiteness, has been called “the best book on the contested issue of the Mormon racial restriction’s origins to date.” Paul is an award-winning teacher, and his presentations will shed new light on a controversial topic. Please join us!

“From Not White Enough, to Too White: Rethinking the Mormon Racial Story”

Drawing upon evidence from his new book, Religion of a Different Color: Race and the Mormon Struggle for Whiteness, Paul Reeve suggests that Mormon whiteness in the nineteenth century was a contested variable, not an assumed fact. Situating the Mormon racial story within the broader context of a very fluid and illogical American racial history, Reeve will trace the evolution of Mormon whiteness over time and offer a new lens through which to view the evolving priesthood and temple bans within Mormonism. He argues that one way in which Mormons attempted to secure whiteness for themselves was in distance from their fellow black Mormons. 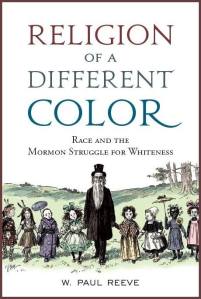 In December 2013, an essay entitled “Race and the Priesthood” was posted at LDS.org. Approved by the First Presidency and the Quorum of Twelve Apostles, the essay “disavowed” previous LDS teachings on race and “condemned” any and all racism. This talk will explore the historical roots of those now “disavowed” teachings and place them in a broader American racial context. While most people are familiar with the Church of Jesus Christ of Latter-day Saints’ nineteenth-century racial policies, few are equally familiar with the ways in which outsiders conflated Mormons with blacks. Outsiders sometimes racialized Mormons in the nineteenth-century and denigrated them as “white slaves,” and facilitators of racial contamination. In a national racial context that privileged whiteness at every turn, Mormons responded by making efforts to claim whiteness for themselves. This additional context puts the Mormon racial priesthood and temple restrictions in a new light. The talk will end with an exploration of ways to think through this history and what it means to be black, white, and Mormon in the twenty-first century.

Paul Reeve is the author of Religion of a Different Color: Race and the Mormon Struggle for Whiteness, published by Oxford University Press in 2015. He also wrote Making Space on the Western Frontier: Mormons, Miners, and Southern Paiutes, and co-edited with Ardis E. Parshall, Mormonism: A Historical Encyclopedia. With Michael Van Wagenen he co-edited Between Pulpit and Pew: The Supernatural World in Mormon History and Folklore. He is the Director of Graduate Studies in the History Department at the University of Utah where he teaches courses on Utah history, Mormon history, and the history of the U.S. West. He is the recipient of the University of Utah’s Early Career Teaching Award and of the College of Humanities Ramona W. Cannon Award for Teaching Excellence in the Humanities.