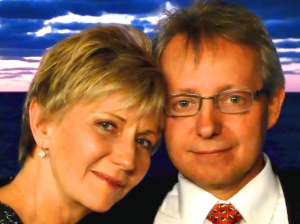 Miller Eccles Study Group Texas is excited to announce that our January 2014 speakers will be Fiona and Terryl Givens, co-authors of “The God Who Weeps: How Mormonism Makes Sense of Life” — a Deseret Book bestseller.

Friday, January 17, 7 pm (McKinney)
**Please take note of the different location.  The Friday evening study group meeting will not be held at the Miller home in McKinney.  It will be held at the office of Dale Drake near the town square in McKinney.**
110 E. Davis Street
McKinney, Texas 75070

Faith and testimony are built on foundations that we sometimes fail to question or analyze. Like the fish that doesn’t know what “wet” is, because it is the only environment it has known, disciples sometimes proceed on the basis of unconsciously held assumptions. Terryl and Fiona will discuss paradigms and models that underlie many of the difficulties in personal faith journeys. Topics will include The Use and Abuse of Reason; The Role and Function of the Church; Mormonism and Monopolies, and other issues. (From their forthcoming book, “The Crucible of Doubt“)

“The God Who Weeps”

When Joseph was told that contemporary creeds were “an abomination,” to which creeds did the condemnation apply, and why? Terryl and Fiona will discuss the five revolutionary fundamentals of the gospel that Joseph Smith restored, with particular attention to their theological contrast with creeds of the day. They include the nature of God, the eternal existence of the soul, mortality as “ascent,” universal access to salvation, and heaven as built upon personal relationships.

Terryl Givens is Professor of Literature and Religion and James Bostwick Chair of English at the University of Richmond. Author of several books, his writing has been praised by the New York Times as provocative reading, and includes, most recently, When Souls Had Wings, a history of the idea of premortal life in Western thought, and a biography (with Matthew Grow) of Parley Pratt. A new book, Wrestling the Angel: The Foundations of Mormon Thought, will be released this fall.

Fiona Givens was born in Nairobi, Kenya, educated in British convent schools, and converted to the LDS church in Frankfurt, Germany. She graduated from the University of Richmond with degrees in French and German, then received an M.A. in European History while co-raising the last of her six children. She is a frequent speaker on podcasts and at conferences from Time out for Women to Sunstone, and has published in Womens Exponent II, and Dialogue. She is the co-author of The God Who Weeps.